UNIVERSITY OF MASSACHUSETTS AT AMHERST 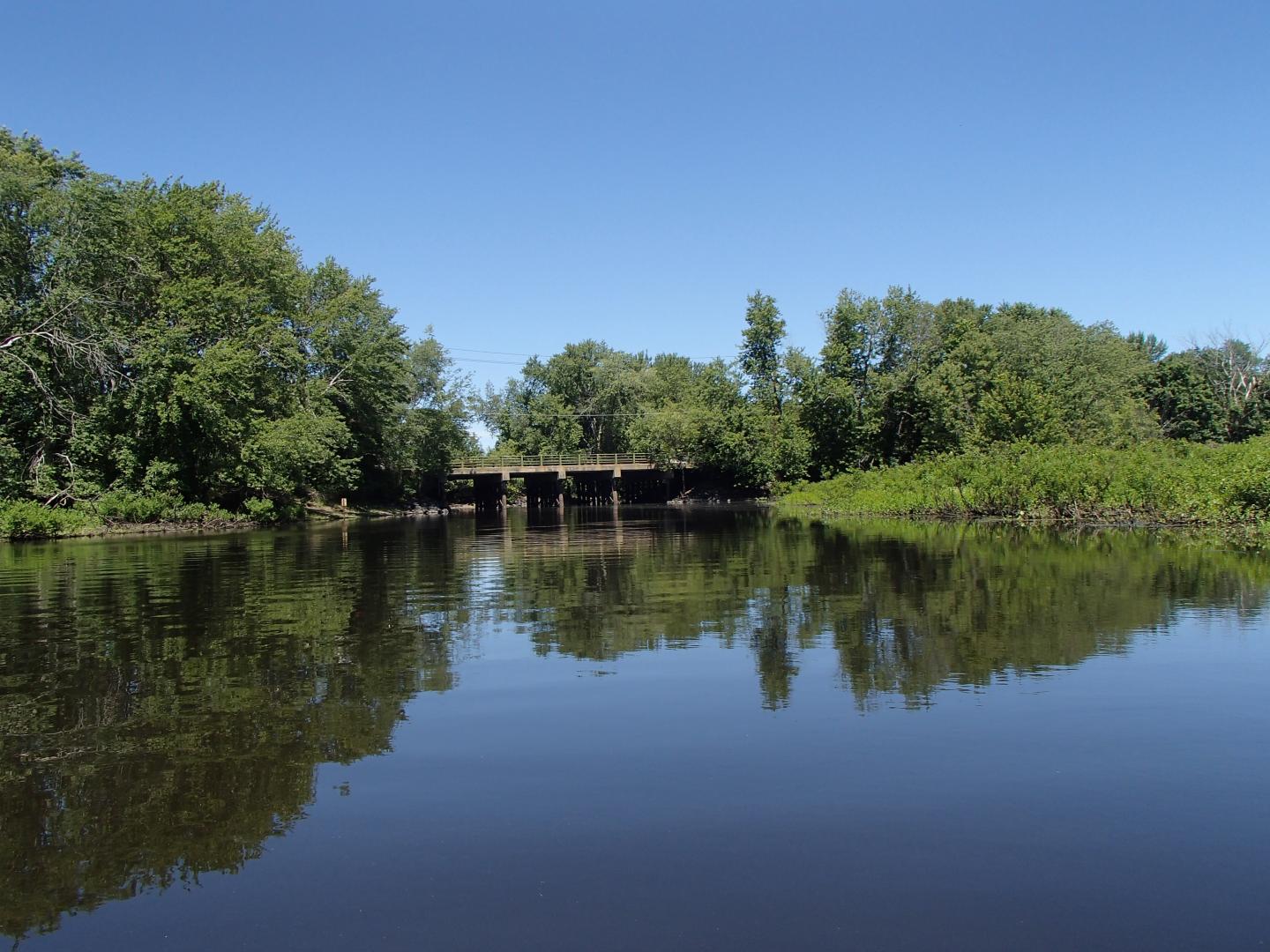 The Pelham Island Road bridge is on the Sudbury River in Wayland, Mass. A new study by watershed scientist Timothy Randhir of UMass Amherst suggests that threats such as water shortages and poor quality to rivers such as the Sudbury, Assabet and Concord Rivers in northeast Massachusetts can be met if managers begin to act now.

AMHERST, Mass. - As climate change and population pressure both intensify in suburban areas northwest of Boston in the coming decades, a new study by watershed scientist Timothy Randhir of the University of Massachusetts Amherst suggests that threats to the area's watershed such as water shortages and poor quality can be met if managers begin to act now.

Randhir and his graduate student Ammara Talib took multiple ecohydrologic variables into account in their study of the north-flowing Sudbury, Assabet and Concord Rivers, modeling the watershed's vulnerability in various predicted land use and climate change scenarios. The so-called "SuAsCo" river system is located about 30 miles northwest of Boston in eastern Worcester and western Middlesex counties. Details of the investigation appear in the current issue of Journal of Water and Climate Change.

As Randhir explains, "This is one of many suburbanizing watersheds that faces intense land development pressure in the next few decades, so it's a good place to study the impacts of current, changing and future land use plus climate change. A lot of studies in hydrology climate science focus on climate, but very few combine the two, land use and its synergy with climate change. We modeled how this watershed is going to look in the next 90 years, up to 2100, taking both into account."

He says, "Stormwater impacts are going to be intensified because of the combined influence. But it's not too late here. It may be too late for fully developed regions, but for areas like SuASCo they still have a chance to conserve their existing open space, use practices like installing fewer impervious parking lots, for example, that interfere with groundwater recharge."

The researchers found that surface runoff can increase significantly, from 28 percent of baseline in 2035 to 78 percent by 2100 due to reduction in forested area and increased evaporation. Surface water runoff, or stormwater flows, can be reduced by such practices as restoring wetlands, adding bioretention swales to parking lots, installing rain gardens, use of conservation farm tilling, terraces, reduced groundwater pumping and irrigation management.

The authors say adopting such "green infrastructure design" and water conservation incentives that address climate change and ecohydrologic conditions can be successful tools for town, fire and public health officials and others preparing master plans to retain an adequate supply of good quality water for community services.

For this two-year study, Randhir and Talib used simulations and multivariate statistical modeling to explore the effects of such factors as annual evaporation, precipitation, temperature and soil moisture on watershed-scale runoff and the interaction between soil moisture and other climatic variables on runoff patterns. Talib gathered geographical information on land cover, soils, stream hydrology and climate data from local stations over the past 50 years plus predictions from the Intergovernmental Panel on Climate Change. She put these into a calibrated and validated watershed simulation model originally developed by the U.S. Geological Survey.

One primary model prediction, Randhir says, is that the SuAsCo region will become more and more urbanized with more impact on water resources, and climate change will make it worse. "One surprising result was the extremes we saw in the models," he notes. "Winter snow melts come earlier, in February instead of the slow March-into-April melt of the past. Early snow melt is not good. The snowpack should be there. We saw this in 2015, the snowpack melted very quickly and caused flooding."

Another of these extremes is seen in low-flow periods, he adds. "On the upper-flow side in late winter and spring you get flooding and in the low-flow summer months you'll see not much water in the river. Summer brings higher demand and lower resources. We are already seeing it now, but by the middle-to-end of this century, these extremes are expected to intensify. Right now low flows can actually mean a dry riverbed. Our model predicts that this could be much worse in the future."

It's not only the SuAsCo watershed facing these problems; the Connecticut River and the Blackstone River watersheds face very similar predictions, Randhir notes. "We hope decision makers, conservation commissions, land use planners, local and regional officials who regulate land use practices modify their land use policies to help their communities become more resilient."

Because some of the recommended conservation practices have multiple co-benefits, immediately improving water quality and conservation, he says, "You can reap benefits early. If a town revises its practices, updates its master plan, it will reap benefits in better recharge, reduced pollution levels and improved resilience. Most towns have reached their maximum in water supply right now, so they must go for conservation soon," he adds. "They can't keep expanding their use, because the supply is already at max."

The authors conclude, "A comprehensive strategy of low-impact developments, smart growth and open space is critical to handle future changes to watershed systems. This needs a participatory approach, as land use change impacts need information-sharing and cooperative approaches to implementing these strategies for sustaining watershed ecosystems."

A Fulbright award to Talib supported some of this work, along with funding from the U.S. Department of Agriculture's National Institute for Food and Agriculture.