The Zika virus: we should expect more like it!

The most recent panic surrounding the Zika virus (family Flaviviridae, genus Flavivirus) which spread over South and Central Americas, jeopardizing the 2016 Olympic Games scheduled in Brazil, is certainly not the first of its kind. The vector Aedes aegypti (a mosquito) is also well-known for its pivotal role in the dissemination of other viruses. These include alphaviruses such as Western Equine Encephalitis (WEE), Sindbis virus (SIN), Chikungunya (CHIK), Semliki Forest virus (SF), Barmah Forest virus (BF), etc., with wild mammals and birds also acting as amplifying hosts. Among the Flaviviruses (to which Zika belongs) one can find Rocio Encephalitis virus (RE), Wesselsbron fever, Yellow Fever (YF) and the infamous DEN (dengue fever, types 1-4) and DHF (Dengue hemorrhagic fever) – all highly severe diseases.

It can be stated with a high degree of confidence that flaviviruses (once established primarily in the tropics) are now a global problem due to intensive spread of their carrier vectors (arthropods). Flaviviruses are transmitted to humans and animals by two main vectors: ticks and mosquitoes. Notably, both arthropods can transmit flaviviruses through "transovarial" and "transstadial" processes, particularly when a direct vertebrate host is not directly available (Figure 2). Viral transition from invertebrates to vertebrates is an interesting phenomenon, i.e. in this particular case the arthropod vectors (invertebrates) can multiply very fast (days) and reach high numbers, versus a much longer time span of reproduction in vertebrates and at much lower numbers (e.g. humans). In an intensive replicative system, any parasitic life form will succeed in its life objective: to spread its genes. For example, A. aegypti that multiply in clean water sources (artificial containers, wasted tires, puddles, etc.) lay eggs that are highly resistant to desiccation (for months) and able to hatch when submerged in water (e.g. after rainfall periods) on the site walls. Anthropophilic females of this mosquito species have the characteristic of interrupted and multiple feeding prior to gonotrophic cycle completion and, when infected with one of the flaviviruses (Dengue, Chikungunya and Yellow fever viruses) or simultaneously with two types (e.g. West Nile and Usutu viruses), it is done permanently.

In tropical countries, temperature and rainfall impact the distribution of Dengue Fever virus. The transmission of DEN virus is most closely related to warm and rainy seasons. Rainwater collection expands the breeding sites. Temperature was found to cut down the extrinsic incubation period (the interval between the acquisition of an infectious agent by a vector and the vector's ability to transmit the agent to other susceptible vertebrate hosts) and extend the mosquito’s life span, consequently increasing biting frequency. According to recent data, global warming and interannual climate variations do not seem to significantly impact the transmission of Dengue and other mosquito-borne flaviviruses, nevertheless socio-economical aspects such as people's increased mobility, international trade, urban poverty, lack of piped water, open reservoirs and air conditioning do enhance disease spread and persistence. Here should be mentioned a distinctive case in which global trade of used tires had been shown to contribute to spread of mosquitoes between USA, Japan and South Korea.  In the case of West Nile virus (WNV) an additional factor was found to be involved in the dramatic expansion to new geographic areas beside global commerce, climate change and ecological factors. This change was related to new genotypes that evolved from febrile illness of children in endemic areas to neurological disease as a result of a more virulent genotype emergence. From the genetic point of view, in spite of WNV’s stable evolutionary structure, the introduction of a new genotype to North America in 1999 was linked to better and more efficient propagation at elevated temperatures (indicating temperature as a selective criteria) as well as prior mutation (under adaptive evolutionary pressure) associated with increased replication in avian hosts, demonstrating the rapid adaptation of these viruses to both hosts: vertebrates and invertebrates.

Viral disease spread and persistence factors are also linked to human determinants such as: blood virus titer (viremia, though viremia threshold is still undefined), herd immunity and household multiple infections (clusters of dengue infections). Known in Thailand as an endemic area, Bangkok, a metropolitan area of over 9 million people, was found to be the country’s endemic center.  Based on the number of paediatric cases in a Bangkok hospital from 1983 to 1997, waves of severe cases progressed from the capital in all directions, moving at a speed of 148 km per month.

An interesting feature on the oviposition site preferences of Aedes aegypti was recently published. A previous study showed that Aedes aegypti females lay and disperse their eggs in multiple water-filled containers, a phenomenon called "skip oviposition". This environmental bounce behaviour was related to some chemical response of female mosquitoes. Based on these details, scientists clearly proved that kairomones such as: bamboo and white-oak leaf infusions (kairomone is a semiochemical mediator involved in inter-specific interactions) attract Aedes aegypti females to lay their eggs when present. These kairomones are specific bacteria-associated carboxylic acids and methyl esters that can serve as potent oviposition stimulants, therefore a potential tool in biological warfare against these mosquitoes. To strengthen this phenomenon, it was shown that Aedes aegypti larval and pupal abundance were larger in containers with leaf litter or algae. Pupal productivity and biomass of emerging females varied in containers with litter of different tree species. The organics produced by litter are the basic nutrients for different bacteria present in water containers to produce the aforementioned kairomones.

In an interesting review, the term of "nidus" (nest in Latin) (described as a place where pathogen transmission occurs) was described as a spatial defined focus in landscape epidemiology, where host, vector, and pathogen populations interact spatially within a permissive environment. The nidus is characterized by vegetation, climate, latitude, elevation, and geology. This article showed that in certain ecotones, in which mosquito vectors and avian abundance prevail, there is a significant potential increase in West Nile virus transmission in the USA, but this is certainly also true around the globe. Such ecotones (transects intersecting desert scrub vegetation and citrus orchard habitat) are utilized by both birds and mosquitoes: for nesting and host seeking, respectively.

Beside humans, other mammals (pigs) are also involved in persistence of flaviviruses. Japanese Encephalitis virus (JEV) is distributed throughout Southeast Asia, the Indian subcontinent, Indonesian archipelago and into the Australasian zoogeographical region with high fatality cases. While infected with JEV, humans and horses do develop fatal encephalitis, yet they are dead-end hosts due to low viremia/ Thus, the virus is maintained in an enzootic cycle between ardeid wading birds, Culex mosquitoes and pigs that are important for epizootic transmission. Again, birds are involved as amplifying hosts and through their long distance flight they can spread the virus to new ecosystems.

In another study, West Nile fever (WNF) outbreaks in southern Russia from 1999 to 2007 were recorded. For 4 years (2000-2004) the incidence rates dropped to zero, while in 1999 and 2007 they were at their peak. 1999 and 2007 had experienced the warmest winters and summers. Two mosquito types were shown to transmit WNF in this area:  Culex pipiens and Culex modestus, both attracted to humans and birds. The authors of this study put emphasis on climatic conditions as predisposing factors for WNF spread in this temperate climate zone. Flood periods in temperate areas revealed enormously high population density of mosquitoes (like the one that occurred in 1997, Morava River in South Moravia, Czech Republic) that significantly increased infection rate of these mosquitoes with flaviviruses (WNV).

The spread of flaviviruses to temperate climates is coupled with the resistance to much lower temperatures, especially in winter times, of their vectors. Mosquitoes from Aedes family are among those well adapted to temperate winters through hibernation, tolerance of eggs to sub-zero temperatures and adults’ survival throughout the winter in appropriate microhabitats (Figure 1).

In summary, Zika virus is only a reminder of many others waiting to emerge in favourable environmental conditions. Global attention and public warnings in light of the recent information that Zika spread from pregnant women to their foetuses, followed by babies’ microcephaly, as well its transmission via sexual contact and blood (longer persistence in semen than in blood) (CDC, http://www.cdc.gov/zika/transmission/index.html) is the right precaution to prevent further spread But, from the scientific point of view, we can cite Harry S. Truman: “There is nothing new in the world except the history you do not know”. 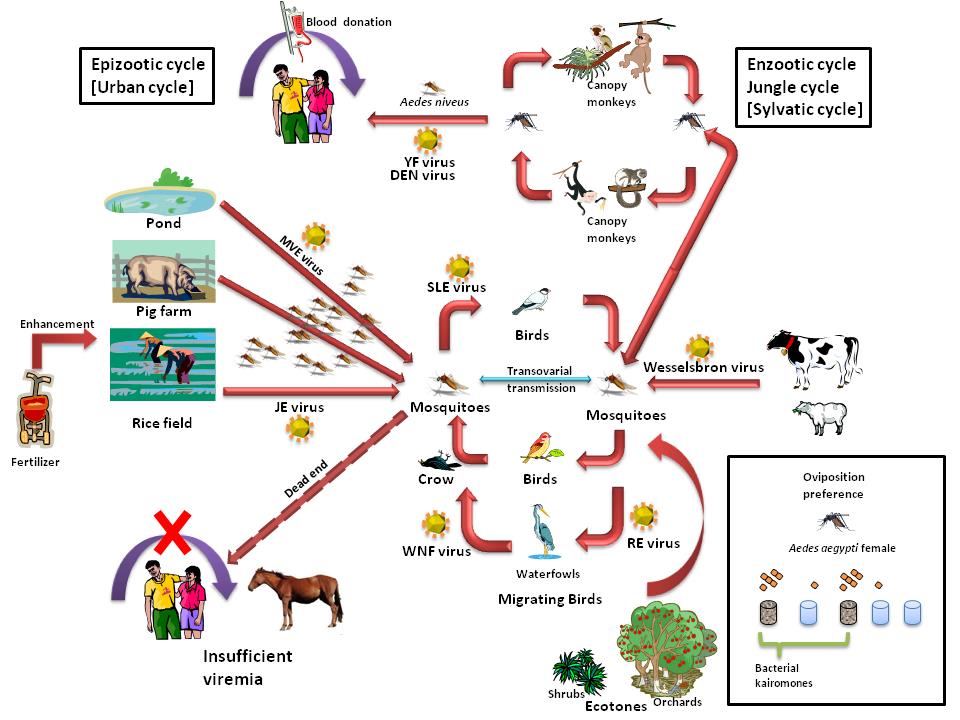 Robert Armon is a Professor of Environmental Microbiology at the Faculty of Civil & Environmental Engineering at Technion (Israel Institute of Technology). He is the author of the comprehensive book: Environmental Aspects of Zoonotic Diseases (2012) with Uta Cheruti, in which many disease agents (bacteria, viruses, fungi and protozoa) are described and linked to environmental changes, promoting numerous new ideas on these topics for public attention and future research.

Trending Article in Hydrology Research📈 "Dramatic Growth of Hydrological Science in the UK in the 1960s and Early… https://t.co/yMx1KqZTpF — 22 hours 55 min ago
Trending Article in Water Policy 📈 "A comparative study of various parameters of drinking water quality in Shahrou… https://t.co/gG4SurLp4c — 1 day 21 hours ago
RT @IWAHQ: 📅 Nominations are closing soon on 27 May for the IWA #Gender Diversity and Water Award. 🏳️‍🌈 Find out more and su… https://t.co/30Q0dtVeZp — 2 days 4 hours ago