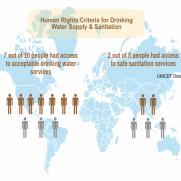 Translating the Human Rights criteria into action is a challenge for water and sanitation professionals, particularly for regulators. Mohamed Tawfik and the IWA Communications department for Water Policy and Regulation have procvided a helpful outline and infographics to illustrate some of the key criteria & principles in relation to drinking water supply and sanitation services.

What needs to change to achieve access to sanitation for all by 2030?

Andrés Hueso, Senior Policy Analyst for Sanitation at WaterAid, discusses the opportunities and challenges involved in global prioritisation of sanitation and water for all.

Would the poor slum dweller contribute financially for water supply and why?

Following the publication of research from 23 slums of Kolkata, India, author Indranil De considers the willingness of different ethnic groups to pay for better water supply and the factors that affect this.

Journal author Dr Ephias M. Makaudze outlines the significance of his studies into the importance of clean water and safe sanitation to people living with HIV and AIDs in South Africa, where rising urban slum population increasingly strains the resources of local municipalities. 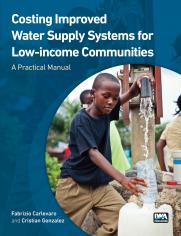 This free downloadable Excel-based costing tool is designed to be used with its manual which can be purchased...

Waterborne diseases are caused by pathogenic microorganisms which are directly transmitted when contaminated fresh water is consumed. Contaminated fresh water, used in the preparation of food, can be the source of foodborne disease through consumption of the same microorganisms. According to the World Health Organization, diarrheal disease accounts for an estimated 4.1% of the total DALY (diability-adjusted life year)  global burden of disease and is responsible for the deaths of 1.8 million people every year. It was estimated that 88% of that burden is attributable to unsafe water supply, sanitation and hygiene, and is mostly concentrated in children in developing countries.