Activated sludge (AS) is a process dealing with the treatment of sewage and industrial wastewaters and developed around 1912-1914. There is a large varity of design, however, in principle all AS consist of three main components: an aeration tank, which serves as bio reactor; a settling tank ("final clarifier") for seperation of AS solids and treated waste water; a return activated sludge (RAS) equipment to transfer settled AS from the clarifier to the influent of the aeration tank (Fig. 1). Atmospheric air or in rare cases pure oxygen is introduced to a mixture of primary treated or screened sewage (or industrial wastewater) combined with organisms to develop a biological floc ("Activated Sludge" AS). The mixture of raw sewage (or industrial wastewater) and biological mass is commonly known as Mixed Liquor. Typically, dry solids concentrations of mixed liquor (MLSS) range from 3 to 6 g/L. With all activated sludge plants, the concentration of biodegradable components present in the influent is reduced due to biological (and sometimes chemical) processes in the aeration tank. The removal efficiency is controlled by different boundary conditions, e.g. the hydraulic residence time (HRT) in the aeration tank, which is defined by aeration tank volume divided by the flow rate. Other factors are: Influent load (BOD5, COD, Nitrogen,...) in relation to the AS solids present in the aeration tank (Food:Microorganism Ratio, F:M Ratio), oxygen supply, temperature, etc. At the effluent of the aeration tank, mixed liquor is discharged into settling tanks and the supernatant (treated waste water) is run off to be discharged to a natural water or undergo further treatment before discharge. The settled AS is returned to the head of the aeration tank (RAS) to re-seed the new sewage (or industrial wastewater) entering the tank and to ensure the desired MLSS concentration in the aeration tank. Due to biological growth (and solids present in the raw waste water which are only partly degraded), excess sludge eventually accumulates beyond the desired MLSS concentration in the aeration tank. This amount of solid (called Waste Activated Sludge WAS) is removed from the treatment process to keep the ratio of biomass to food supplied (sewage or wastewater) in balance and the F:M ratio in a defined range. WAS is stored away from the main treatment process in storage tanks and is further treated by digestion, either under anaerobic or aerobic conditions prior to disposal. 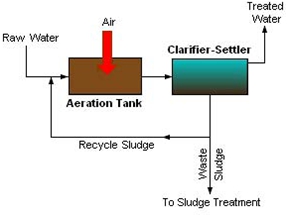 Many sewage treatment plants use axial flow pumps to transfer nitrified mixed liquor from the aeration zone to the anoxic zone for de-nitrification. These pumps are often referred to as Internal Mixed Liquor Recycle pumps (IMLR pumps). The raw sewage, the RAS, and the nitrified mixed liquor are mixed by submersible mixers in the anoxic zones in order to achieve de-nitrification.

The activated sludge process was discovered in 1913 in the UK by two engineers, Edward Arden and W.T. Lockett, conducting research for the Manchester Corporation Rivers Department at Davyhulme Sewage Works. Experiments on treating sewage in a draw-and-fill reactor (the precursor to today's sequencing batch reactor) produced a highly treated effluent. Believing that the sludge had been activated (in a similar manner to activated carbon) the process was named activated sludge. Not until much later was it realized that what had actually occurred was a means to concentrate biological organisms, decoupling the liquid retention time (ideally, low, for a compact treatment system) from the solids retention time (ideally, fairly high, for an effluent low in BOD5 and ammonia.)

The main variables of activated sludge process are the mixing regime, loading rate, and the flow scheme.

Generally two types of mixing regimes are of major interest in activated sludge process: plug flow and complete mixing. In the first one, the regime is characterized by orderly flow of mixed liquor through the aeration tank with no element of mixed liquor overtaking or mixing with any other element. There may be lateral mixing of mixed liquor but there must be no mixing along the path of flow.

There are a variety of types of activated sludge plants. These include:

There are a wide range of other types of plants, often serving small communities or industrial plants that may use hybrid treatment processes often involving the use of aerobic sludge to treat the incoming sewage. In such plants the primary settlement stage of treatment may be omitted. In these plants, a biotic floc is created which provides the required substrate.

Package plants are commonly variants of extended aeration, to promote the 'fit & forget' approach required for small communities without dedicated operational staff. There are various standards to assist with their design.

In some areas, where more land is available, sewage is treated in large round or oval ditches with one or more horizontal aerators typically called brush or disc aerators which drive the mixed liquor around the ditch and provide aeration. These are oxidation ditches, often referred to by manufacturer's trade names such as Pasveer, Orbal, or Carrousel. They have the advantage that they are relatively easy to maintain and are resilient to shock loads that often occur in smaller communities (i.e at breakfast time and in the evening).

Where land is in short supply sewage may be treated by injection of oxygen into a pressured return sludge stream which is injected into the base of a deep columnar tank buried in the ground. Such shafts may be up to 100 m deep and are filled with sewage liquor. As the sewage rises the oxygen forced into solution by the pressure at the base of the shaft breaks out as molecular oxygen providing a highly efficient source of oxygen for the activated sludge biota. The rising oxygen and injected return sludgeprovide the physical mechanism for mixing of the sewage and sludge. Mixed sludge and sewage is decanted at the surface and separated into supernatant and sludgecomponents. The efficiency of deep shaft treatment can be high.

However, the costs of construction are high. Deep Shaft has seen greatest uptake in Japan, because of the land area issues. Deep Shaft was developed by ICI, as a spin-off from their Pruteen process. In the UK it is found at three sites: Tilbury, Anglian water, treating a wastewater with a high industrial contribution; Southport, United Utilities, because of land space issues; and Billingham, ICI, again treating industrial effluent, and built (after the Tilbury shafts) by ICI to help the agent sell more.

Deep Shaft is a patented, licensed, process. The licensee has changed several times and, currently (2007), it is Aker Kvaerner Engineering Services.

Most biological oxidation processes for treating industrial wastewaters have in common the use of oxygen (or air) and microbial action. Surface-aerated basins achieve 80 to 90% removal of BOD with retention times of 1 to 10 days. The basins may range in depth from 1.5 to 5.0 m and utilize motor-driven aerators floating on the surface of the wastewater.

In an aerated basin system, the aerators provide two functions: they transfer air into the basins required by the biological oxidation reactions, and they provide the mixing required for dispersing the air and for contacting the reactants (that is, oxygen, wastewater and microbes). Typically, the floating surface aerators are rated to deliver the amount of air equivalent to 1.8 to 2.7 kg O2/kWh. However, they do not provide as good mixing as is normally achieved in activated sludge systems and therefore aerated basins do not achieve the same performance level as activated sludge units.

Biological oxidation processes are sensitive to temperature and, between 0 °C and 40 °C, the rate of biological reactions increase with temperature. Most surface aerated vessels operate at between 4 °C and 32 °C.

Sewage liquor is run into deep tanks with diffuser blocks attached to the floor. These are like the diffuser blocks used in tropical fish tanks but on a much larger scale. Air is pumped through the blocks and the curtain of bubbles formed both oxygenates the liquor and also provide the necessary stirring action. Where capacity is limited or the sewage is unusually strong or difficult to treat, oxygen may be used instead of air. Typically, the air is generated by some type of blower or compressor.

Vertically mounted tubes of up to 1 m diameter extending from just above the base of a deep concrete tank to just below the surface of the sewage liquor. A typical shaft might be 10 m high. At the surface end the tube is formed into a cone with helical vanes attached to the inner surface. When the tube is rotated, the vanes spin liquor up and out of the cones drawing new sewage liquor from the base of the tank. In many works each cone is located in a separate cell that can be isolated from the remaining cells if required for maintenance. Some works may have two cones to a cell and some large works may have 4 cones per cell.