Distillation Treatment and Removal of Contaminants from Drinking Water

Distillation treatment typically removes most of the dissolved materials. In addition, the boiling process kills biological contaminants. Nevertheless, there are certain volatile and semi-volatile organic compounds that may not be removed by distillation (CDPH 2009). Organic compounds that boil at temperatures greater than the boiling point of water (some pesticides) can be effectively removed from the water (MSUE 2003). Organic compounds that boil at temperatures lower than the boiling point of water (ex., benzene and toluene) will be vaporized along with the water. If these harmful compounds are not removed prior to condensation, they will remain in the purified product (MSUE 2003).

For heating water solar energy can be harnessed by the use of a system of mirrors following the path of the sun to focus the sunlight on sheets of water in a solar still. In solar stills, salt water is filled in basins with glass panes as roof at an angle of 10 to 18; tightly sealed to the holding frame and the joints between the still cover and the vertical walls perfectly tight. Upon heating by solar heat the water molecules are converted into steam leaving behind the salts at the basin. The steam is condensed at the bottom of the glass roof of the still and water slides along the slopes of the glass panel and collected in the collecting troughs. The collecting troughs at the foot of the glass pane cover of the still must be constructed in such a way that water will drain freely to the pipe which carries the distillate to the fresh water tank. (Source: TWT 2011). 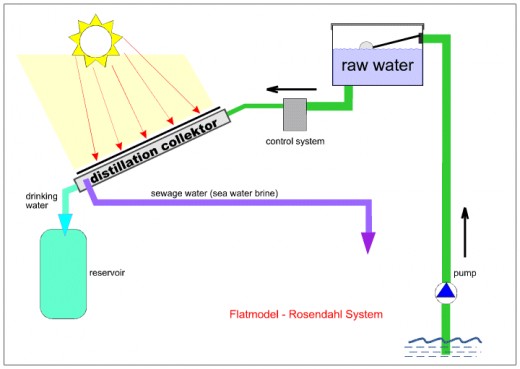 In multi stage flash (MSF) distillation, the feed water is heated and the pressure is lowered, so the water flashes into steam. This process constitutes one stage of a number of stages in series, each of which is at a lower pressure (TWT 2011).

Distillation will not remove all the chemicals but removes soluble minerals (i.e., calcium, magnesium, and phosphorous) and dangerous heavy metals like lead, arsenic, and mercury. Some of the chemicals of concern produce hazardous compounds during the heating process. The vaporization process strips salt, metals, and biological threats. Stripping of minerals will not be harmful to the human body system as stated by World Health Organization (WHO). According to WHO (2009), the human body obtains vast majority of minerals from food or supplements, not from drinking water.

🔓New #OpenAccess Flip! We are excited to share that 'Water and Energy: Threats and Opportunities - Second Edition'… https://t.co/1pCD5N28sZ — 1 day 19 hours ago
RT @Chronoshub: Now Rod Cookson from @IWAPublishing is talking about how their article downloads have doubled since their flip to… https://t.co/8AiJYoh3ho — 1 day 20 hours ago
RT @Chronoshub: 1st speaker is Rod Cookson from @iwapublishing who is talking about the changes in metrics that IWA Publishing jour… https://t.co/u9C82BrztB — 1 day 22 hours ago