Since heavy metal ions are non-biodegradable, they can accumulate their amounts along the food chain. Therefore, it is critical necessary to remove or minimize the heavy metal ions in wastewater systematically. A number of methods are already at operation and Table 1 presents some frequently-used technologies for heavy metal removal. 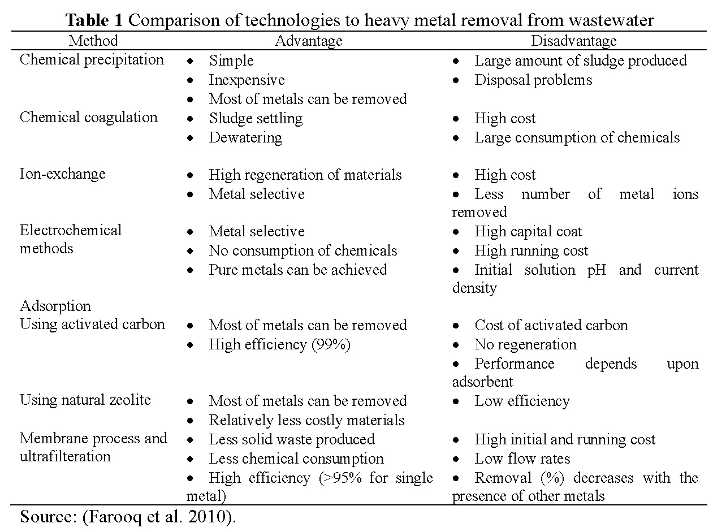 Precipitation is an important adsorptive mechanism in the removal of heavy metals. It depends on the solubility product Ksp of the metal involved, pH of the wastewaterand concentration of metal ions and relevant anions. According to Matagi et al. (1998), precipitation from a saturated solution of a sparingly soluble heavy metal salt may be represented by the following dynamic equilibrium:

At equilibrium, the metal ions removal rate in the form of a precipitate equals the dissolution rate from the precipitate. When the product values of the concentration of cations and anions are exceeds Ksp, precipitation occurs.

Even though chemical precipitation is a widely used method, it has the drawbacks of producing large amount of concentrated and further toxic sludge wastes, which leads to disposal problems. For example, industrial wastewaters containing 0.1 g•dm-3 of Cu(II), Cd(II) or Hg(II) compounds give 10, 9 and 5 times larger amounts of sediments, respectively; and 6 kg of sediments are obtained from one kilogram of chromates (Fabiani, 1992). Moreover, there are concentration limits to which the method is economical, for it may become too expensive or ineffective to treat wastes with metal ion concentrations of 100 mg/L or below (Ceribasi and Yetis, 2001).

Ion exchange (IX) can attract soluble ions from the liquid phase to the solid phase, which is the most widely used method in water treatment industry. As a cost-effective method, ion exchange process normally involves low-cost materials and convenient operations, and it has been proved to be very effective for removing heavy metals from aqueous solutions, particular for treating water with low concentration of heavy metals (Dizge, 2009; Hamdoui, 2009).

Ion exchange transfers one or more ionic species from one liquid phase to another via intermediate solid resins. To achieve this, a group of ion species (the target ions) present in a solution is exchanged with another group of ion species belonging to a solid phase (IX resin or IXR). The target ions which may be toxic, precious, orcontaminants affecting water purity are therefore concentrated on the resin, while non-toxic, precious or contaminating ions are released from the resin to replace them in the solution. Furthermore, the ion exchange process is typically intended to be a reversible one. Thus, the spent resins are expected to be regenerated and reused. The use of a regenerant on the IXR could, subsequently release the target ions into solution again and allow recovery of the IXR’s exchange capacity so that it may be applied again on more of the original solution.

Different ions are not bound to the active (functional) groups of an ion exchanger resin with the same affinities. Multivalent ions normally are more strongly absorbed from dilute solutions than ions of lower valence (e.g., Ca2+ vs. Na+). For different ions, they have the following superiority order:

Heavy metals in wastewater can be removed by adsorption on solid matrices, such as activated carbon, metal oxides, and agricultural products, all of which have been already used as adsorbents for toxic heavy metal removal. Adsorption by activated carbon is the most efficient classical way as it removal rate can be more than 99% for certain metal ions. However, because of its relatively high cost and it cannot be regenerated and recycled, attempts have been made to utilize low cost, naturally occurring adsorbents to remove contaminants from wastewater (Aksu, 1997; Doğan, 2000).

Biosorption is one of the most promising technologies in the removal of toxic metals from aqueous solution, municipal and industrial wastewater (Senthilkumar et al., 2000). It involves low cost, easily available dead or living biomass (materials of biological origin) that removes heavy metals from wastewater and sludge (Azza, 2009). Biosorption processes offer the advantages of metal recovery, regeneration of biosorbent, minimization of the volume of chemical and/or biological sludge to be disposed of and high efficiency in detoxifying very dilute effluents (Goksungur, 2005). Biomass from algae (Hamdy, 2000), fungi (Kapoor et al., 1999), bacteria (Ozturk, 2007), sea-weeds (Elangovan et al., 2008), and some higher plants (Rahman et al., 2005) have been effectively and successfully utilized in metal removal studies.

Activated sludge biomass (ASB) is a new technological tool which been proven as a more effective and sustainable technique for bioleaching or biosorption of the metal ions Cd(II), Pb(II) and Zn(II) from sewage sludge and wastewater. It can reduce the concentration of metal ions to environmentally acceptable levels at an affordable cost (Hammaini et al., 2007). Ahmad et al. (2010) conducted a study and demonstrated that biosorption by ASB is a sustainable technique and effective system that can remove 59.3%, 68.5% and 86.5% of Cd(II), Pb(II) and Zn(II) ions respectively from industrial wastewater, treatment plants and municipal sewage sludge.